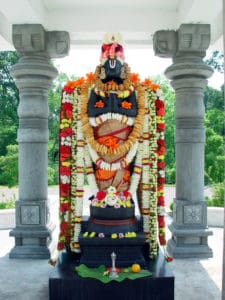 Hanuman is considered Chiranjeevi (will live eternally). He is strong, full of valor, with various skills and powers. At the same time , he is wise, a great gnani, a yogi, a brahmachari. He had the one thought only – that of serving his Lord Rama with utmost humility and devotion.

As a devotee of Lord Rama, he became very popular for his devotion and great qualities. Any one who is familiar with the Ramayana, cannot but appreciate his divine nature and super human personality, shaped by the strength of celibacy, humility, selflessness, unsurpassed devotion, determination, fearlessness and an extraordinary commitment to work for the divine.

The Power of Devotion
The character of Hanuman teaches us of the unlimited power that lies unused within each one of us. Hanuman directed all his energies towards the worship of Lord Rama, and his undying devotion made him such that he became free from all physical fatigue. And Hanuman’s only desire was to go on serving Rama. Hanuman perfectly exemplifies ‘Dasyabhava’ devotion — one of the nine types of devotions — that bonds the master and the servant. His greatness lies in his complete merger with his Lord, which also formed the base of his genial qualities.

Hanuman is worshipped with offerings of butter & Vadaimala (a garland of vadas).