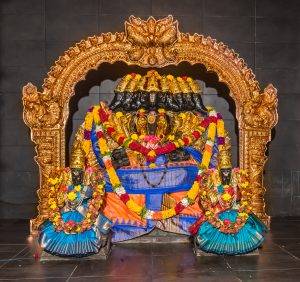 The journey of Sri Ashtamukha Gandabheruda Lakshmi Narasimha Swamy, started 45 years ago in Hrishikesh. Our Chief Priest Sri Narayanam Venkata Satyanarayana Charyulu, was working as priest in Sri Venkateshwara Temple in Hrishikesh. A Himalayan Saint asked him to take a dip into Ganges river and initiated him into Sri Ashtamukha Gandabheruda Lakshmi Narasimha maha mantra, which he has been chanting since then. Inspite of many offers from various Temples in North America Sri Satyanarayana Charyulu choose to come to Memphis as a chief priest in 1995. In the same year Sri Vidyananda Swamy and Sri Paripoornananda Swamy of Vyasasram, Tirupathi, visited our Temple and suggested to perform yagnas to enhance the aura of the Temple. 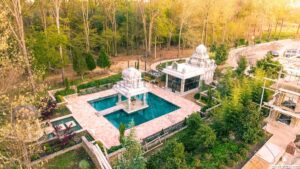 The Yagnam was performed on a grand scale with 108 homa kunds and 120 priests from India, Europe and N America, under the aeges of Sri Karunamayi Vijayeswari Devi. Subsequently our Temple performed this yagnam at Tipparti, Nalgonda Dist. A.P. in 2010 and again in 2014 at Mangalagiri (which is one of the 9 holy places of Lord Sri Narasimha), and in Hyderabad in 2016. As we are planning for a pushkarini in our Temple, it was decided to install Sri Ashtamukha Gandabheruda Lakshmi Narasimha swamy on the south side and Sri Vikhanasa, Atri, Kasyapa, Mareechi and Bhrugu Maharshi’s, on the north side of the pushkarini.

Due to the abundant blessings of the Gurus and due to the grace of Lord Sri Narasimha, we were blessed with the opportunity to construct the world’s first Temple for Sri Ashtamukha Gandabheruda Lakshmi Narasimha Swamy and North America’s first pushkarini and Sri Vikhanasa Maharshi Temple in Eads, Tennessee.

Temple Prathista is the time when deity is invited to come and dwell in the Temple. Only great merit awards the good fortune to participate in such an auspicious event.

Lord Narsimha Swamy is flanked by Sridevi and Bhudevi. This form of the lord was manifested to Prahallada in the previous Kalpa after killing Hiranyakasyapa. The reference can be found in Atharva Veda Rahasya and Paramardhika Bhashyam of Vaikhanasa Agama.

Vikhanasa Maharshi is of Sri Mahavishnu who established the procedure of worship for Mahavishnu , which is come to known as Vaikhanasa Agama. He and his four disciples Arti, Kasypa, Mareechi and Bhrugu Maharshis wrote several scriptures on construction of Temples, worshiping procedures and conduction of various Utsavas for Vishnu.This is the tradition followed at Tirumala as well as in our Temple.In honor of these great Rishis we are establishing a temple for them for the first time in the United States.