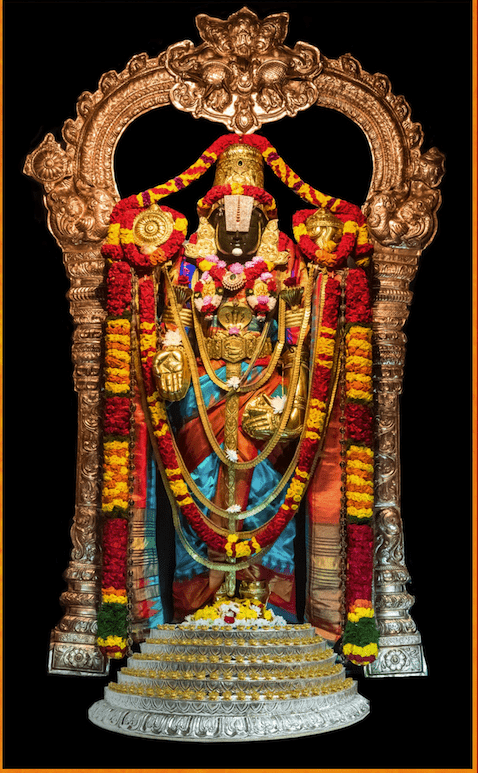 History & Religious Significance: This seva is usually conducted in Tirumala temple on every Tuesday after the second bell. This ritual was first introduced in Srivari Temple in 1984 on the Golden Jubilee Year of TTD, when a Muslim Devotee offered Lord Srinivasa 108 gold lotuses. Later it became an Arjitha Seva called Ashtadala Pada Padmaaradhana Seva.

In this seva Abhishekam & Sahasranamarchana is performed to Sri Bhoga Srinivas Murthy followed by Ashtottara Sata Namarchana with 108 golden lotuses. Devotees with proper dress will be seated in Ardhamantapam during the seva which takes about an hour.

At ICCT Memphis the same will be replicated. On the occasion of the Silver Jubilee Celebrations (2019) ICCT is introducing a new Arjitha Seva for Lord Sri Venkateswara called Ashtadala Pada Padmaaradhana Seva. This seva will be performed on every sunday morning at 9.30 am using 108 Ashtadala (eight petal) golden lotus flowers.

Each flower will be made of gold and decorated with precious stones. Devotees can donate these golden flowers for a donation of $2,500 each. As a token of appreciation, donors can perform Ashtadala Pada Padmaaradhana Seva for their lifetime. Please refer to donor benefits for more details.

This is once in a life time opportunity and great offering to Lord Venkateswara as these Ashtadala Padmas will be used in the Seva until eternity.

We hope you avail this truly “Golden” opportunity.