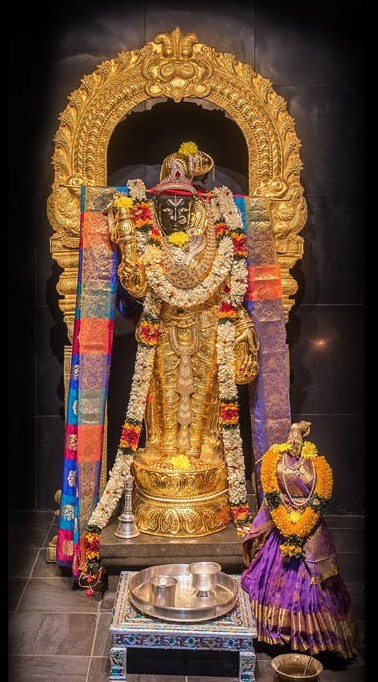 The month of Dhanurmasa is considered a very special month for religious services. Lord Krishna declares in the Bhagavad Gita: “I manifest the most in the month of Margashira (also known as Dhanurmasam) among the months of a year”. For this reason, sages have set apart this month to be completely focused on devotional activities. According to tradition, the Gods wake up early in the morning during the month of Dhanurmasam. They perform special prayers to Sri Maha Vishnu during the auspicious period of Brahma Muhurta. It is said that worshipping Lord Vishnu on a single day during this auspicious period is equal to worshiping Lord Vishnu with devotion for 1000 years.

During Dhanurmasam, tributes are paid to Sri Bhudevi (Andal) through the study and recitation of Tiruppavai, a composition in Tamil. According to traditional legends, Sri Andal (Bhudevi) spent her youth pursuing her goal of realizing oneness with Sri Maha Vishnu. She successfully achieved her union with Sri Maha Vishnu through Bhakti or devotion. Tiruppavai is a poem of 30 verses composed by Sri Andal, in which she imagines herself to be Lord Narayana’s bride, yearning to serve him in this life and forever. She also describes the religious vow (pavai) that she will take in order to achieve this purpose.

During the month of Dhanurmasam, daily Sri Venkateswara Suprabhatam (morning hymns to wake up Sri Venkateswara) is complemented with Tirupalli Yeluchi, a Tamil composition of 10 verses from Alwar’s Divyaprabandham, followed by the recitation of Tiruppavai. Devotees offer sweet Pongal, Kara Pongal, and Pulihora as Naivedya and distribute the same as prasadam to others during Dhanurmasam.

Temple OPENS every morning from December 16 at 6:00 AM during Dhanurmasam.