invites your family and friends

Due to the ongoing pandemic and for the safety of everyone, masks fully covering the nose and mouth are MANDATORY inside all temple buildings. Vaccination is recommended for all visitors. Please follow temple visiting guidelines when you visit the temple. 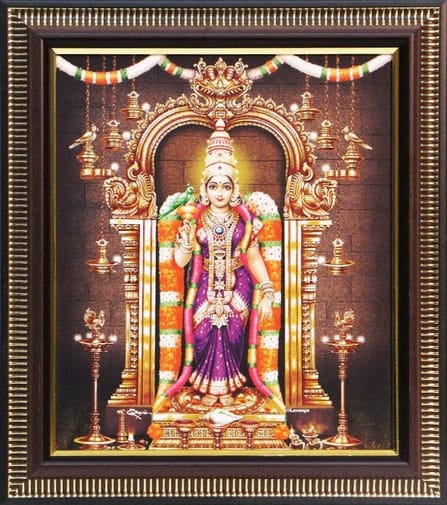 Sri Vasavi Kanyaka Parameswari Devi is the Goddess of Vaishyas, who showed that bravery in standing up for self and perseverance is what makes a God different from a mere human being. Devi’s temple is located in Penugonda in West Godavari district, which is called the Kasi of Vaishyas.

Back in 10th-11th century AD, this place was ruled by Kusuma Sresti, the King of Vaishyas, under Vishnu Vardhana. His kingdom was part and parcel of Vengidesha, which was ruled by Vishnu Vardhana. After a lot of offerings and penances, his wife Kusumamba finally gave birth to a boy, Virupaksha, and also a girl named Vasavamba. A prophecy said that the children of Kusumamba will fight for the welfare of all. Virupaksha grew up to be a fine leader while Vasavamba was more inclined towards art, culture and music and showed a philosophical approach to life. Virupaksha grew up and went on to marry Rathnavathi, the daughter of Aridhisresti of Aelur town.

Once Vishnu Vardhana was welcomed by Kusuma Sresti and is honored. During that visit, Vardhana noticed Vasavamba and was determined to marry her. Perplexed by this, Kumara Sresti leaves the decision to Vasavamba’s wish. They were concerned about the age and the king being married before. When asked about her wish on being married to the King, Vasavamba expresses her wish to stay single and live her life away from all the worldly pleasures. Vardhana who got furious on the lady’s refusal, waged war against Kusuma Sresti’s kingdom. But the batallion’s were thwarted by the troops of Penugonda.

Then, Kusuma Sresti, worried about the going on consequences, arranges a meeting with Vaishya leaders of all 714 gotras in the presence of Bhaskaracharya, the Guru of Vaishyas. Except for 102 gotras, rest all agree that the marriage should be done to avoid the destruction of their clans. But this was denied by Bhaskaracharya who says that a woman’s decision should always be respected and whatever happens they must stand by Vasavamba’s decision. Then the unity of the clan was broken and those 102 gotras prepared for the defence of Penugonda against further attacks of Vishnu Vardhana.

After hearing this Vasavi says that non-violence is the best path to choose to prove that the enemy is wrong. She decides to sacrifice herself and asks the couples of those 102 gotras to join her. She decides only people with strong willpower and moral strength can participate in this kind of self sacrifice. Everyone wholeheartedly gave their consent. They intended that Vasavi must be an incarnation of God and requested her to show her real nature. She then revealed her true self and attained salvation with the people from 102 gotras and jumped into 103 pyres. The sermons given by her were made into transcripts and scriptures and are about patriotism, honesty, social service and tolerance.

After listening to this, Vishnu Vardhana who was on his way of attacking the city felt bad omens. He couldn’t bear the great shock and his heart shattered into pieces. He fell down vomiting blood and died right there. People condemned the deeds of Vishnuvardhana and appreciated the epoch maker Vasavi and her non-violent principle. The son of Vishnu Vardhana, Raja Raja Narendra rushes to Penugonda and repented about the incident. After talking to Virupaksha they all decide to follow the path of Vasavi’s principle of non violence. Hence forth Vaishyas shall not fight or rule states but shall engage in service and as well wishers of others including services such as trade and agriculture. She is from then on considered the Goddess of Vaishyas and is renowned as Vasavi Kanyaka Parameswari.

She stood up as a strong women who defended her principles and the status of women. That worthy character of her made her immortal. Vasavi, who had rejected worldly pleasures, won the minds of Vaishyas and is the champion of peace and non-violence and is remembered by the faithful. Even in the present the spirit of her is celebrated throughout the world. Her major temple is located in Penugonda and leaves unforgettable impression on the minds of the devotees and beckons repeated visits on and on.

Raja Poshakas (Yearly $2500 donors and above) during 2022 are eligible to participate in these celebrations without any additional sponsorship’s
To know more about how you can participate in the majority of temple events with a highly discounted yearly donation, please visit our Poshaka Parivar page