Brahmotsavam is an annual temple festival performed to its deity that is celebrated on a large scale. As per the sacred scripts; this was initiated and performed for the first time by Lord Brahma himself in honor of and in obeisance to Lord Sri Venkateswara; and to mark the occasion of Lord’s entering Aananda Nilaya along with his consort Goddess Padmaavathi Devi at Tirumala Kshethra. ICCT is conducting Brahmotsavam for Lord Sri Venkateswara every year as it has been conducted in Tirumala from ages. 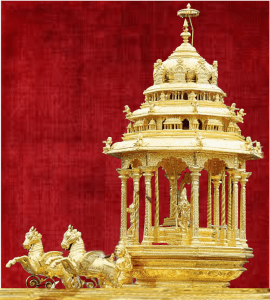 Swarna Rathotsavam: Car or chariot festival known as Rathotsavam proclaims distinctiveness of Brahmotsavam. Lord Venkateshwara gives darshan to his scores of devotees in a majestic style on this day seated on a highly decorated chariot. Deities of Daaruka (the charioteer of Lord Sri Krushna) and the four horses’ viz. Sugreevam; Shaibyam; Meghapuspham; and Valahakam are placed before the decorated idols of Lord and His consorts. It is believed and said that those who witness the Lord seated on the Chariot during Rathotsavam will not be reborn; rathostham kesavam dristva punarjanma na vidyate

ICCT is planning to have Swarna Ratham to conduct Ratha Vahana Seva during Brahmotsavams of Lord Sri Venkateswara & Shiva and for Narasimha during Narasimha Jayanthi.

This is an unique opportunity for sponsors to avail the recognition, honor and blessings during the day of Ratha Vahana Seva. This special privilege will be received by all sponsors every year during Brahmotsavam celebrations.

Swarna Ratham Vahanam—$5,000
-Sponsors will be recognized as Vahana Daatha every year