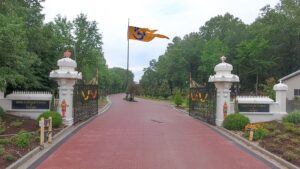 Pranava means “cosmic sound” in Sanskrit. It is the name for the mantra, Om (or Aum). It represents as the word of power in Hindu philosophy as it is thought to be the primordial sound from which the universe originated. It is the most sacred of all mantras and syllables because it causes all prana to unite with the Divine.

Dhvaja refers to “that which marks a temple or such other places”. Also symbolizes by making oneself known to others, indicating that one is a source of charity and safety to all sentient beings. An indication of the triumph of the Dharma.

ICCT hoists the Pranava Dvajam as a symbol of pride and signal to all that “Sanatana Dharma shall prevail.”