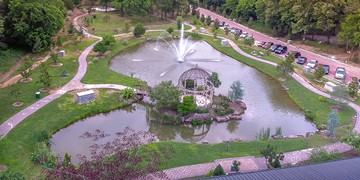 Aum is the ancient one; the primordial source of all creation; the thread that binds atman and brahman; the sound of the shankha; a celebration of the creative power of the universe. In the turbulent, ever changing currents of time that erode everything they touch, Aum is constant, stable, and eternal.

Many years ago, Dr. Prasad Duggirala was visiting Kauai’s Hindu Monastery, in Kapaa, Hawaii where the sights and sounds of the serene Rishi Valley inspired him to revisit his plans for creating a Meditation Garden at ICCT, developing it further into the Tapovanam concept. Dr. Duggirala shared this vision with the board of trustees upon his return, and the team enthusiastically began working towards realizing it.

It began with the creation of the Padmasarovaram — a beautiful lake with a little island at the center. This was followed by developing a 2500 ft. walk spanning the gardens. At the highest point along the walk, a fountain in the shape of a lotus with 16 petals was added, at the center of which stands Lord Krishna, playing his flute, surrounded by 8 Gopikas showering him with water. 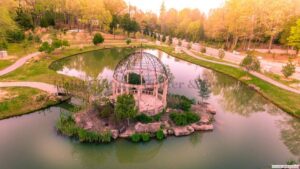 Walking further down the path, brings you to the valley of flowers, passing which you enter the peace gardens — a meadow with minimalistic design, moss covered boulders, and a serene emptiness broken by the occasional tree to reflect on. The path culminates in the Meditation Hall — a 2000 sq ft space with an homage to great saints who have contributed immensely to Hindu philosophy and knowledge. These include Sri Dakshinamoorthy, Adi Shankaracharya, Maharshi Patanjali, Gautam Buddha, Ramakrishna Paramhamsa, Vivekananda, Ramana Maharshi, Malayala Swamy, and Shivay Subramanyaswamy. May their remembrance inspire visitors to part the blinding fog of life with clarity and mindfulness. If visiting meditators are able to achieve that moment of peace and clarity in the Tapovanam, we shall know our labors to have been fruitful.”